We left Hollingbourne at eight o’clock on the morning of October 9th and arrived at Ripley Castle for a splendid and life- sustaining lunch. We walked around the gardens with a knowledgeable gardener and we viewed a lake fed by three rivers; an unidentified yellow-berried holly; a Wellingtonia and some yews.

The following morning, we left our hotel and drove to the Bowes Museum at Barnard Castle in county Durham. Arriving at the museum we were astonished at its architectural design which was described by no less a personage than Nikolaus Pevsner as ‘big, bold and incongruous looking like the Town Hall of a major provincial town in France.’ However, despite its outward appearance we were both amazed and delighted by the wealth of artefacts inside. The museum had been purpose-built for John Bowes and his wife Josephine Chevalier, Countess of Montalbo, for £100,000 (£10 million in present-day money) but, sadly, was not completed until after their deaths. The museum contains, the largest collection of Spanish paintings outside London and is internationally acclaimed for its Silver Swan, a musical automaton first seen in 1774 in the shop of its maker, James Cox, in London.

After lunch we drove to Thorp Perrow, considered by many to be the pre-eminent arboretum in the north of England and unique in that it was created by a single person, Sir Leonard Ropner. In the mid nineteenth century seeds were imported from North America to establish what has now become the Milbank Pinetum; planting continued at the site and in 1931 the present arboretum was designed, covering in excess of 100m acres. Our guide for the tour was the curator, Faith Douglas, who displayed an encyclopaedic knowledge of the trees and who assured us that in the time available we could only tour a small area of the entire collection. To our surprise the entire area is served by ONE gardener, 10 part-time volunteers and by Lady Roper who cuts the grass!

A delightful feature of the design was the development of three ‘autumnal glades’ and a series of single-species avenues. We were told that a former avenue of ancient cherry trees had to be felled and care was taken to replant the area with modern cultivars to establish a broad avenue leading the eye to a monumental vista. In the millennium area we found two small lakes which had developed immediately after the felling of a copse of poplars, indicating the amazing capacity of these trees to remove ground-water. In the mediaeval woodland area, the conifers have been imaginatively under-planted with colourful Acers thus relieving the area from its former gloomy aspect. The arboretum at Thorp Perrow holds 5 National Plant Collections; 67 Champion Trees and we noted a massive beech; a fine avenue of Italian Alders; a Sicilian Pine; a Snake-bark Maple (Acer forrestii) and a superb oak bearing massive leaves, Quercus canariensis. All in all, we were privileged to view a fine collection of trees which is truly worthy of another visit.

The following morning, October 11, we visited Castle Howard. We were met by our guide and taken to Ray Wood situated on an elevated area of the grounds. As we began our climb our attention was drawn to the Prince Albert Yew which turned out to be not a yew but Saxegothaea conscpicua, a member of the Podocarpus family native to southern South America. Ray Wood flourished for two centuries before it was clear-felled in the 1940s but was replanted in 1948. Two decades later the newly established wood became the basis of the present arboretum following the planting of rare species of Rhododendrons, collected by Joseph Hooker in Sikkim in 1849, and some rare Magnolias from China. We saw a fine specimen of Rhododendron rex with its enormous leaves; R. barbatum with its smooth, peeling bark; Magnolia officinalis and a very large Davidia. We ended our walk with a magnificent view over agricultural land still in the ownership of the castle. We also discovered that Ray Wood is managed by the Yorkshire Arboretum – the site of our next visit.

The Yorkshire Arboretum was established on 125 acres of land which was originally an extension of land surrounding Castle Howard. It is presently managed as an independent charitable trust by a joint agreement between the Castle and Kew Gardens. Much of the planting was begun in 2010 by using saplings brought originally to Castle Howard from a local plant-propagator. Unfortunately, our tour was marred by a heavy shower of rain and we failed to appreciate the efforts of the volunteer gardeners. On a serendipitous note we were approached in the cafe by a student from Sheffield University who was completing a dissertation on the life of Richard St-Barbe Baker – our Founder; we were promised copies of any published work.

The final day of our tour comprised a morning visit to Clumber Park and a non-tree-orientated shopping expedition to Welbeck!
Clumber Park comprises 3,800 acres of what was originally part of the Sherwood Forest from which it was detached in 1707 by the Duke of Newcastle. We approached the park via an avenue of 1,846 lime trees originally leading to Clumber House, which was demolished in 1937. All of the lime trees bore bands of sticky material to prevent the upward progress of caterpillars of the destructive winter moth.
The estate comprises some ancient oaks, chestnuts and sycamores but the remaining trees are less than 100 years old; one-third of the entire estate is designated as a Site of Special Scientific Interest. We admired a cedar avenue planted in 1850; a group of Cedrus atlantica in Temple Glade; a Pencil Cedar (Juniperus virginiana) and the enormous 109-acre lake which cost exactly £6,632/5/6d to dig and establish. Before leaving we had a chance to examine the newly painted and refurbished glass-house stretching 186 feet into the distance; a lot of glass to clean! Like many other sites that we visit we wished for more time to tour this superb collection of trees.

Wellbeck Park can be considered as a departure from our usual treed sites and the area comprised a well-stocked Garden Centre; a food store; and the magnificent Portland Gallery housing a wealth of magnificent artefacts of historical interest and a gallery of huge painting which included (great joy!) some fine paintings of trees! Our homeward journey was uneventful and everyone appeared to have enjoyed our excursion to Yorkshire. 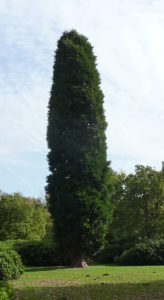