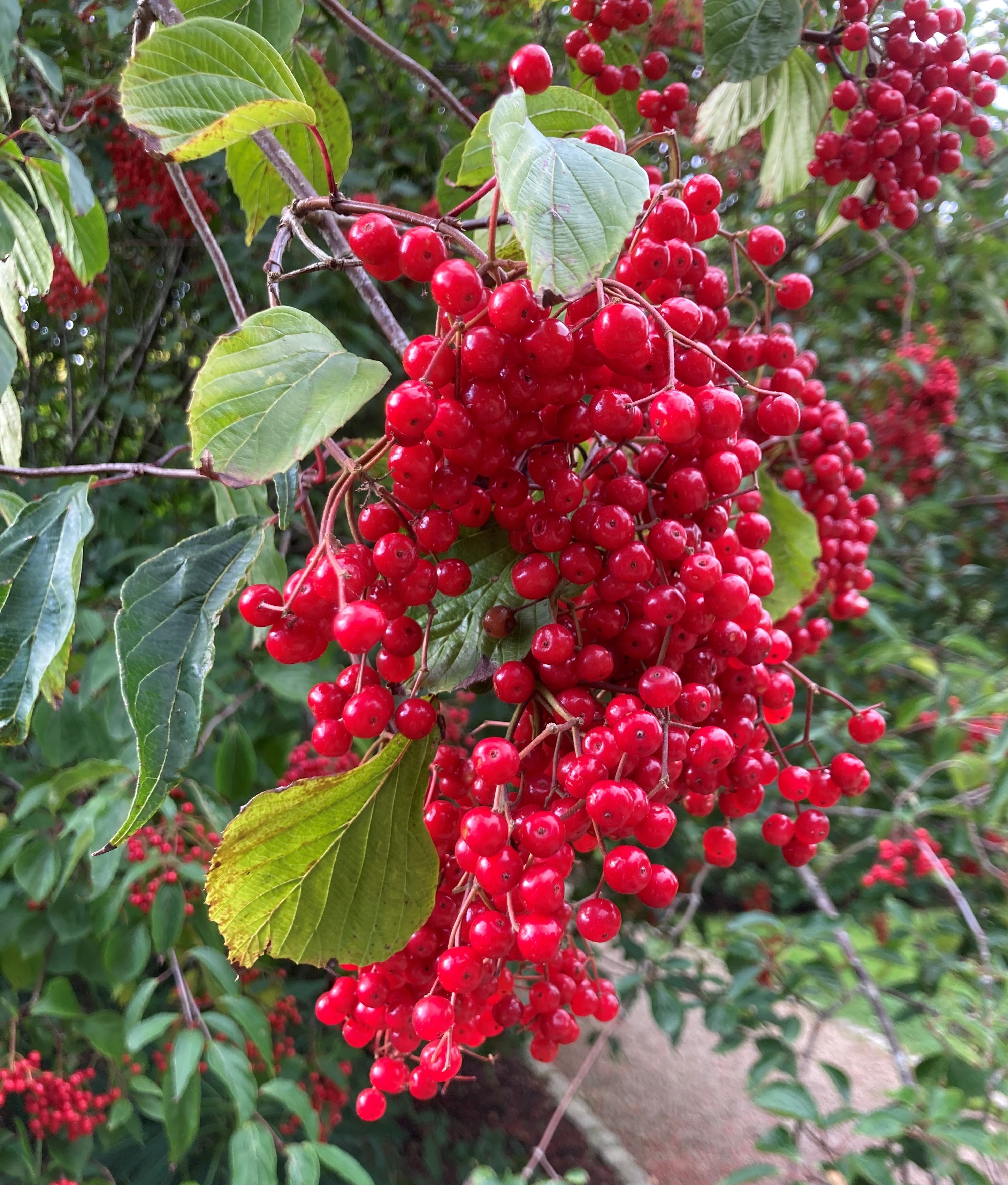 On October 11th 2021 fourteen brave souls took the perilous journey to the far West and into the land of the Celts. Would they be met with hostility as foreign invaders? We knew that the journey would be long and to add a semblance of normality to our fatigued state we stopped off at Stover Country Park near Newton Abbott. The Park was developed by the Templar family on their estate which they had occupied since 1765. During our time-restricted visit we saw some trees, an expanse of water and some delightfully decorated Mandarin Ducks. Resuming our journey, we arrived at out hotel in time to unpack before enjoying a very good dinner.

The following morning, we travelled to Pencarrow Estate, the home of the Molesworth-St Aubyn’s for the last 500 years, and journeyed along the mile-long driveway and through an iron-age fort to be met by Tracey Davies who introduced us to the senior gardener Gavin Vague. We learnt that the estate measures 2500 acres and the garden 50 acres and this was established by Thomas Corbett in 1831-55. The present garden holds in excess of 680 specimens of rhododendrons and camellias and has England’s earliest rockery made of granite blocks hewn from Bodmin moor. It is claimed that the Monkey Puzzle tree was first named as such in this garden following an uncomfortable encounter between the spikey leaves and a visitor to the gardens. During our perambulation we came across a 10th century Way Cross which had been discovered in a field and which was erected on a stone slab in the Pencarrow garden We walked around the lake and saw some truly magnificent trees and in particular we were all entranced by the scent of a golden-leafed Cercidiphyllum japonicum (the Katsura tree) drifting over the water. Trees of note included Podocarpus salignis, Cephalotaxus harringtonii (the Japanese plum yew) and a magnificent Serbian beech- F. sylvatica zlantia. Lunch was served and before leaving Pencarrow some of us were lucky to meet the present Lady Molesworth who asked us to recommend the garden to our friends. This we promised faithfully to do.

The afternoon was spent at Lanhydrock where we walked the fourteen miles (or so it seemed) from the car park to the house. The massive, granite-faced house was considered by some of our party to be gloomy and of little interest However, the gardens held some interesting plants. The extensive grounds were dotted with oaks, birches and limes but in the absence of a tree guide we made our way back to the hotel for another sumptuous dinner.

The following morning, we travelled to Tregrehan Gardens to be met by Tom Hudson who is the direct descendant of the original Carlyon family who have occupied the estate since 1565. Our tour took us into the walled garden where we were met by a gigantic, sprawling Magnolia russellianum  and then onto the lawn where we stood beneath a gigantic Cupressus macrocarpa. We were informed that the gardens hold 170 Nation Champion trees including a very tall Sitka spruce measuring 153 feet in height claiming to be Cornwall’s tallest tree. Noting a number of huge magnolias dotted around the garden Owen Johnson, from the British Tree Register, claims that Tregrehan holds 16 of the largest magnolias in Britain including M. campbelli, M. fulva, M.mollicomata and M. sapaensis. Recent work has produced some delightful glades devoid of trees enabling visitors to appreciate the grandeur of the surrounding vegetation. Among noteworthy trees were Nothofagus fusca. Cryptomeria japonica and Quercus carpifolia which was the type-tree to be introduced into Britain. Finishing our tour with coffee everyone agreed that this was one of the most outstanding collection of trees that we had visited and Owen Johnson states: ‘this is the finest private garden in Britain and Ireland for its range and size of recently introduced tree species. A view with which we all concur.

At 12.45, and just a few miles from Tregrehan, we assembled at a private Pinetum Garden where we were served beef stew and bread. Our Guide Mr. Chang Li gave us an explanatory talk on how the Garden was divided into 12 separate areas each with its own characteristic flora. Individual gardens were, to say the least, unexciting though we saw a National Champion Japanese rice-paper plant (Tetrapanax papyrifer) and a very fine Tulip tree. We later examined a Pomaderris apetala also a National Champion. Without doubt the outstanding area of the entire garden was the Pinetum which had been established on some derelict, waste ground some thirty years previously. The trees were widely spaced and included some ground-hugging specimens which would be ideal as ground cover. Unfortunately, no labels could be found for these trees. Our tour ended in a secluded area and in a tea-house overlooking a tranquil pond. Our guide instructed us in the elements of Zen Buddhism and we felt suitably tranquil as we departed for the hotel.

The final day of our excursion to Cornwall featured visits to two totally dissimilar gardens; Lamorran and Trelissick.

Lamorran is sited near St. Mawes and was the brain-child of a London solicitor Robert Dudey-Cooke who used as his guiding principle the creation of a garden to create tranquility and beauty in harmony with nature. The garden encompasses four acres of south-facing land and is approximately 40 years old. The pH of the soil is 4.6 which has allowed the luxuriant growth of many tropical and Mediterranean plants. Most of the plants are evergreen and comprise, inter alia, 18 species of Tree-Fern and 35 species of Palms. New palms are continually being added to the collection and there is now a distinct feeling among the gardening staff that some culling is essential. Plants from the southern hemisphere are well represented in the collection including many species of Ceanothus and a superb Casaurina exquesitifolia.  Water, in the form of seclude pools and waterfalls, abounds throughout the garden and superb oceanic vistas can be enjoyed at a number of seclude sites.

All in all, this superlative, well planted, secluded garden is available for rest, tranquility and especially for nuptials at this delightful site. 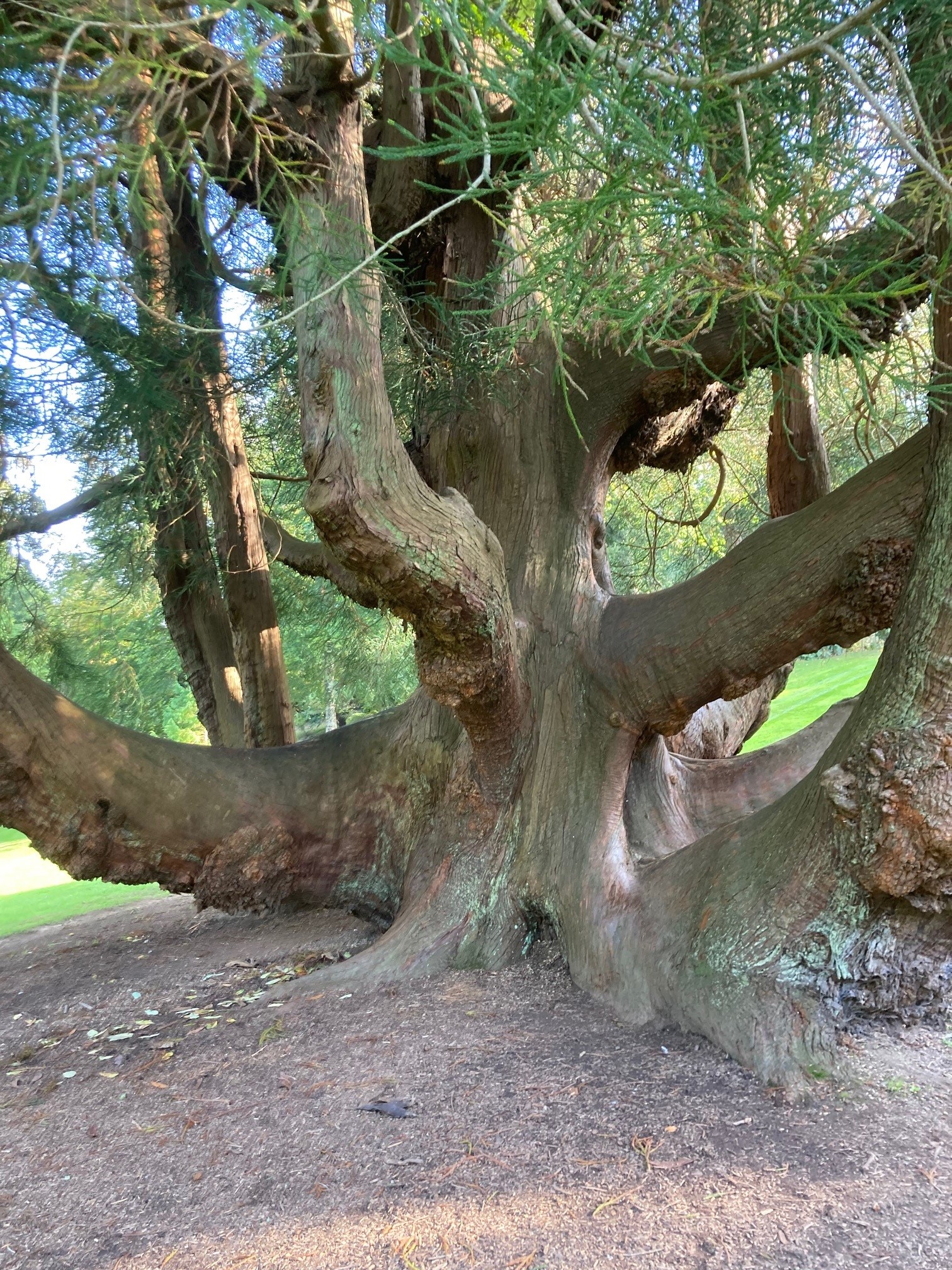 Trelissick. We arrived at this famous garden for a lunch of Cornish Pasty followed by hand-made tray-bakes before meeting our guide for a tour of the gardens. We were informed that the present house was built in 1750 but since that time it has had many owners including a unit of the American army. In 155 the house was gifted to the National Trust. We admired a vista of the sea from what had previously been the tennis court before beginning our walk. We noted some elegant cedars and some impressive holm oaks. Unfortunately, we were far too late to see colour in the rhododendrons and azaleas but noted healthy banana plants, some palms and a magnificent Ginkgo. A curious feature of the garden is the presence of a busy, public road running under a bridge and bisecting the garden. Near here we entered Carcaddon (a former orchard in Cornish) which is an open area of ground planted with a variety of well-spaced trees. Nearby, we found a small orchard planted with rare Cornish apples, cherries and pears. Leaving the best to last we gaped in awe at a massive, multi-branched Cryptomeria japonica which dominated the base of a sloping lawn. Arriving back at the hotel for the last time we all began to think of dinner and packing for the return journey. Dyw genes Kernow.

Following some brilliant driving by Gareth we arrived back at the Mercure Hotel one hour and fifteen minutes ahead of schedule.