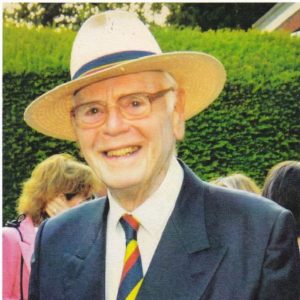 The funeral of KMOTT’s former President, Sir Charles Jessel, Bt, took place on Wednesday, the 20th of April. He was 97.

He studied PPE at Balliol College, Oxford and, after call-up, served in the final years of the war in the 15th/19th The Kings Royal Hussars. He was, in fact, the last surviving war-time ofﬁcer of the regiment.

After the war, and various forays into antiques, stock-broking, politics and journalism in London, Charles made the decision to buy a farm in East Kent, high on the North Downs. Together with his wife Shirley, whom he had met at Moulton Agricultural College, he started a mixed farm including a small dairy herd, a ﬂock of sheep, an arable enterprise and a few goats.

Charles became increasingly interested in gardening and, together with his wife, set about turning a rough ﬁeld around his house into a garden which has been open for the National Garden Scheme for many years. A self-taught gardener, his skills could be seen by the astonishing numbers of roses, shrubs, perennials and trees growing there. His colour schemes and plant associations led to something being in ﬂower almost ten months of the year. In the long winter, evergreen shrubs of various shades give structure, deﬁnition and interest on the darkest of days.

An arboretum, created later, was a passion of Sir Charles and it enabled him to grow more unusual species of shrubs and trees. The site was not ideal being sloping and consisting of very heavy clay. It was also quite isolated and away from the main house and garden. It was very wet in winter but dry in summer. Charles was a keen dowser and used his dowsing skills to ﬁnd the best location for each new shrub or tree – his study in the house became the headquarters of The East Kent Dowsers and his family found his dowsing skills particularly useful when they had mislaid their belongings. Very occasionally the chosen planting site for a tree would be nothing but heavy ﬂints. Charles would merely say, with a wry smile, ‘ls there a problem?’ To this day, the shrubs have ﬂourished despite the challenging conditions.

Having belonged to The International Dendrology Society for many years, Charles was keen to promote the planting of trees in Kent. He was a committee member when the “Kent Branch of the Men of the Trees”, as it was then called, was formed. He became its President in 1980 and in 1985 stepped down to become Vice President when Brigadier Maurice Atherton took over the post. In 1995 he was President of the St Barb Trust, this being at a time when the national Men of the Trees organisation was moving its emphasis to international planting; it would later change its name to the International Tree Foundation. The St Barb Trust became, in the words of the Minutes of the Kent Branch of the MOTT 1995 AGM “a registered charity set up to plant and conserve trees in Kent and a possible vehicle for disaffected ITF members to join.” Shortly after, the St Barb Trust became the Kent Men of the Trees, an organisation independent of the ITF. Sir Charles was its first President, a post he held until 2016.

He retained an active interest in KMOTT, contributing from time to time to Arbor, and opening his arboretum to members to visit. 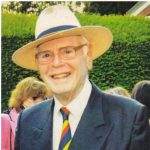