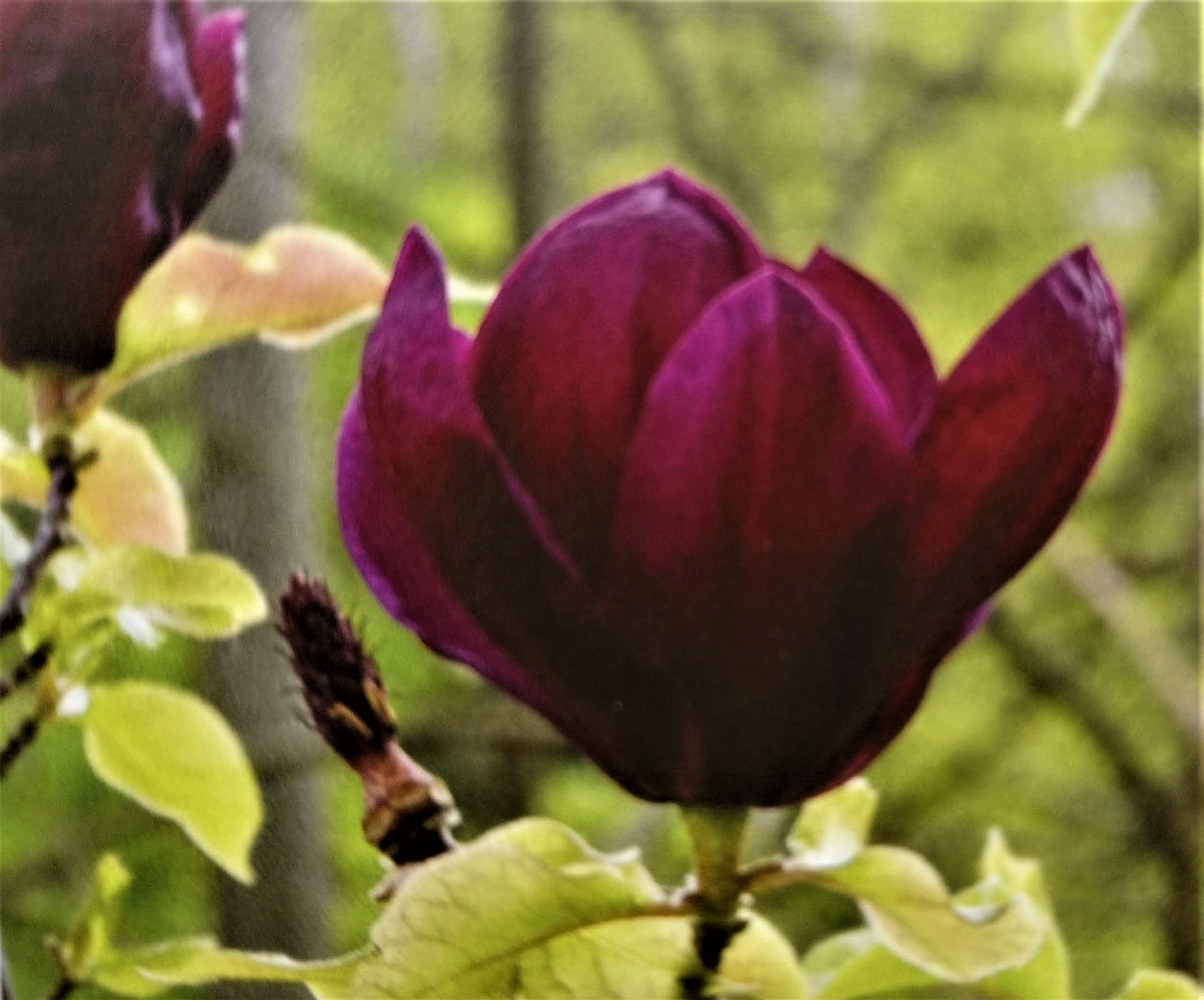 On the first day of the Merry Month of May twenty-three members arrived at the estate of Tom and Davina Wood to tour the woodland that had been created on what had formerly been a plant nursery known as Oakover Nurseries.  After the company had moved to another location Tom Wood bought the 15 acre site and began to develop what has now become a magnificent collection of both native and exotic trees.

We were led on a delightful two-hour walk where we marveled at gigantic Rhododendrons still in bloom and at many colourful Azaleas. We were told that a number of the plants suffered from ‘bud blast’ following infection from the fungus Seifertia azalea  which is transmitted by the leaf-hopper; there is no known control measure available at present! The largest and perhaps the most spectacular Rhododendron was the intensely white R.loderi.(a popular  hybrid produced by crossing R.fortunei with R. griffithianum).

The soil at the estate is acidic and varies from ph 3.2 in the bog area to less than ph 5.0 on the ridges. We were assured that trees such as Quercus  palustris, Euonemus elatus and Oxydendrum arboreum exhibit intensely crimson and deep scarlet leaves in the autumn. This information suggested too many members that a return visit in the autumn would be a sensible and a rewarding excursion!

The collection has some notable oaks but many such as Q.phellos were still in bud. In contrast Q.frainetto (the Hungarian Oak) exhibited a magnificent canopy of young, light –green foliage.

Understandably, there are many unusual and even rare species within the collection and the following were brought to our attention; Melliodendron xylocarpum;  Oxydendrum arboreum (the Sorrel Tree)  and Toona sinensis. To everyone’s delight we were shown the true sugar maple Acer saccharum and not the commonly misnamed Acer saccharinum.

Among the outstanding trees with which we were more familiar were, for example; Ostreya carpinifolia (the hop tree) and Aesculus indica (the Asian horse chestnut) and a magnificent, tall Liriodendron.

Walking towards the bottom lake we encountered  a young specimen of the Giant Himalayan Lily (Cardiocrinum giganteum) which is a herbaceous plant but which rises to a height of 10 feet when fully grown; not actually a tree but  a curiously tall plant.  We also glimpsed the purple flowers of Magnolia  genie– considered to  have  the darkest colour of any known Magnolia. Nearby many of us were able to pick up the fragrant scent of the bright yellow Rhododendron  luteum- formerly R.ponticum- ( the honeysuckle Azalea) not to be confused with the vigorously invasive Rhododendron ponticum. Despite having a delightful fragrance the nectar of R.luteum is highly toxic and has been shown to be fatal to humans. Beware!

Our tour ended on the bank of the lower lake where we saw a fine example of Taxodium and a specimen of Metasequoia glyptostroboides with a typically fluted basal trunk. We heard from Tom Wood that grafted trees (which are more commonly available in nurseries) do not produce this fluted stem and are therefore weaker particularly in heavy wind.

All in all, our joint quest for beautiful trees was fully realized and we are all indebted to our hosts for allowing us to tour their magnificent woodland. To complete the day we were regaled with some welcome tea and some delicious, home-baked cake.  We collected a sum of money from our members and the Woods insisted that it should be sent to their designated charity, the Ashford Pilgrim’s Hospice.